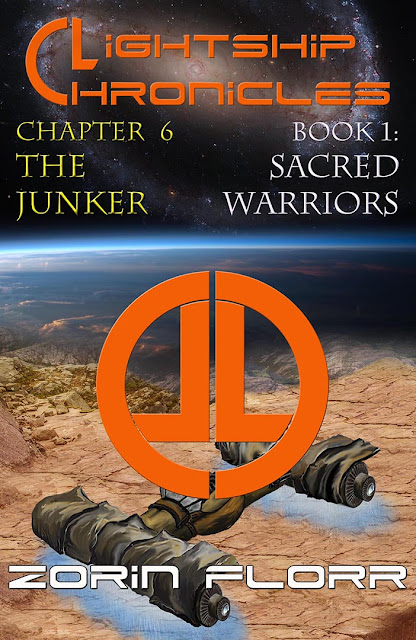 Governor Brandberd Bret is standing in the oval walled hallway, in front of one of the purple embossed panels that's missing the light filaments and bust. He is gently taping the upper corner of the panel with his three middle fingers, and as he does, a small square lights around them. After three or so of these taps an intercom voice becomes audible.
"Go away. I'm not talking to you."
"Son. Last race you almost died, and you haven't talked to me since. Now you're going to race again, and..."
"I almost died because you left me to die! Are you going to end me for good this time?"
"Son please let me in so we can talk." The doors slide open.
Brandberd enters with a hint of trepidation. The room's decor is similar to his office. It looks quite formal, like an appointment or waiting hall of some sort. Ricio is standing in front of a 3D mirroring-hologram of himself, while two beautiful female attendants are helping with his white-leather pilot jumpsuit.
"I need to speak privately with my son." The Governor directs his words towards the attendants with an authoritative tone. The two beautiful young women rush out.
"You were not going to die. I had a plan." Brandberd directs his words to Ricio who shakes his head in disapproval without a word, adjusting his collar with his eyes on the mirroring hologram. "I want to wish you good luck. And be safe. You will become a champion, but it takes time. For a rookie just finishing the race is a win, even for a Bret. We Brets are a great people, but you need to humble yourself to the race, and be patient. Do it step by step, and you will be a champion."
"Don't worry. I won't crash, and I won't have secret conversations with Carpati who happened to rescue me, and save my life."
"Son, I just want you to be safe."
For the first time turning to his dad. "Then why the hell did you force my doctor to take me off intensive healing the day after the race? And then you erased part of the recording. You cared more about what that stupid Carpati saw than my life! Get out!"
"No! Son, listen to me. You don't know who that kid is."
"How can I, you tell me nothing."
"You know that's how the system works. Until you finish The Regime, until you enter Husarii training, you will know nothing. Only after the Crossover, only after you prove yourself, only then, can you know it all."
"Why?"
"Because that's the system. If we change it, it will fall apart."
"Are you telling me that kid, who didn't even know what a hopper is, is a threat to our entire civilization?"
"More than you realize."
"Then tell me!" Looking at his father with intensity.
"What did I just say? What have you been trained since you were a boy?"
"Maybe it's time to change things. You expect me to go through The Regime, endure the insanity of becoming a Husarii, all without incentive? Without knowing why? Give me a reason, and then I'll gladly do this."
"You know why. Knowledge and power. But more important, you are a Bitani and a Bret. We are ordained by virtue of our birth in keeping structure and order on this world. That's reason enough."
"No, it's not. I need to know that I'm doing this for the right reasons. The fact that you refuse to tell me the reason, makes me doubt it even more."
"Son, you're 19 years old. Remember, the only reason you're racing is because of me. You're still a teenager. Your heart is bigger than your brain. That's why you crashed and why you refuse to listen to me now. You are all impulse, act first, think later. You want to know everything, now. You refuse to accept that some things can not be known until the right time. I'm not holding information from you to be a jerk. It's simply not the right time. You will know, but only when you're ready. When you are trained to know. That's what The Regime is for."
"I've heard this line a million times. I don't need to hear it again. If that's all you have to say, leave." Ricio turns back to the 3D mirroring hologram of himself and continues adjusting his suit. Brandberd stands watching without a word. Ricio stops and turns his head to face his dad. "How do you not understand that you were willing to kill me? What you did guaranteed my death. Me, your son. But a Carpati saved me. How can I ever forgive you for that?"
"When you're done with the regime and pass the crossover. When you will no longer be just a citizen, but an administrator, and a Husarii yourself, then you will know, and you will see that I made the right choice."
"Get out! I don't want to see you right now. Leave!" With his face pulled down by disappointment, Brandberd walks to the sliding doors. "And this time, I'm not crashing, so there's no chance for you to let me die." Ricio snaps at his dad just before the doors sweep shut.

Posted by AnOldBlackMarble at 3:32 PM