Lightship 1 is of course Ricio's lightship, The Silver Sickle. It's all white with shiny silver racing stripes and designs. The front is broad and round in the shape of a half moon on its side, somewhat like a sickle with both points pointing backwards. The body extends from the center of the sickle in a long sleek and elegant shape of organic curves accented by grooves and rounded flares. The very back turns into a flat horizontal fishtail-like feature with back pointing tips on the outer edges. The pilot's egg-shaped bubble is encased in the center of the body. It has all around views on top as well as on the bottom, around the seat. The lightship floats about a meter off the ground on a glowing pillow of hazy white light that seems to be the mechanism keeping this machine in the air. 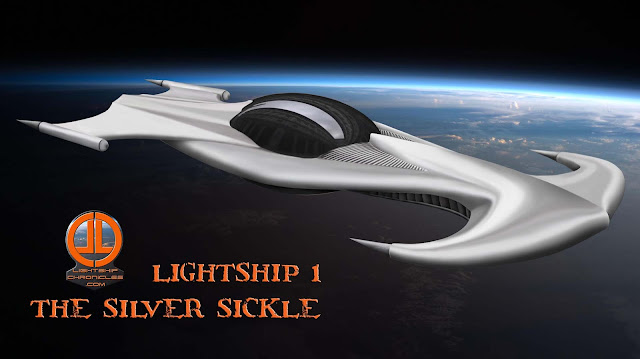 Lightship 2 is the Dragonfly. The body is iridescent greenish-blue with a bubble shaped like a single dragonfly eye. It's at the very front of the body, then tapering back over the top. Behind the bubble, the body is made of segments that taper down a point like a short and chunky dragonfly tail. On either side of the front half of the body, and attached to it by flexible arms, are its two light engines that curve inward in front of the bubble like crab claws, with a meter gap between them. The light pillow below it is sky blue.

Lightship 3 is the Horseshoe. It has a single light emitting engine curving around the front to both sides, like it's namesake. It's center body is egg-shaped, mostly made of the transparent bubble material, which is then encased in a metal frame to give it extra strength. It's attached to its light engine by three flexible arms, two on the side and one up front. It's leathery brown in color with a sulfur yellow light pillow.

Lightship 4 is the Rusted Teardrop, is back. It's body is large and rounded in the front which then tapers to a point at the back. Across the top, from front to back, runs a long tubular bubble like that of jet fighter. The bubble is ringed in two places crossed over by a middle metal band, forming a rusted metal frame for more support. The entire lightship is the color of rust, because it is completely rusted, and full of dents and damage from the previous crash.

Lightship 5, the Black Cross, is made up of two four meter long parallel cylinders that house the engines which produce the purplish-blue glow beneath. Between them, the pilot's bubble is attached to both cylinders by flexible arms. The lightship is all black, including the perfectly spherical bubble in the center. It also has a triangular airfoil streaming behind the bubble to a point like a black triangular mohawk. The solid black metal bubble has a cross shaped window up front. Its black paint is matte, and parts riveted together. It has a Gothic dark and menacing aura about it. 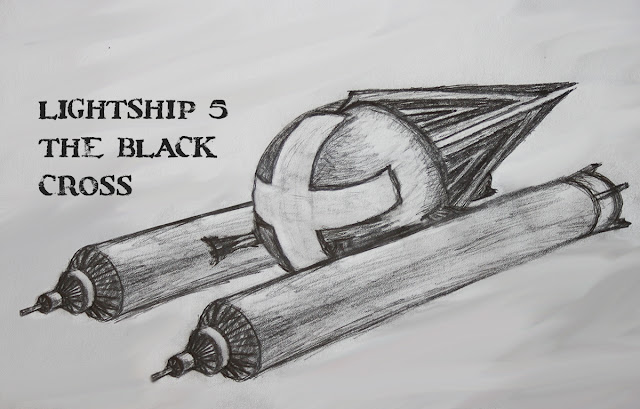 Lightship 6 is the Streamliner. It's shaped like an old streamliner locomotive. The body is vertically taller than wide and tapers into a long fin towards the back. The lower half is flanked by its engines, both attached very close to the body. The pilot's bubble is right up front, in the tip of the 'nose' of the lightship, which protrudes slightly forward. It's a large lightship with patchy rusty-red colors, and it floats on a red glow. 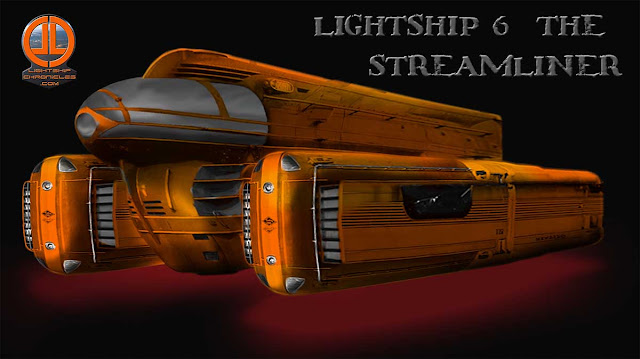 Lightship 7 is the Course Crusher. Powerful name but unfortunately a weak ship. It's over one hundred years old, and a civilian lightspeeder made by the Burebista company, called the Burebista CC. A hundred years ago, Burebista was a top manufacturer of lightships in their time. They were famous for making beautiful works of art that were also the fastest lightships, and dominated the races. The Course Crusher was the civilian version and their best selling model of all time. The ones in mint condition have become classics, but  most are old wrecks and turned into racers by those who can't afford a proper modern lightship, since parts and options for them are plentiful. But without proper modifications, their top speed is only 500kph and will not keep up with the modern lightships. Wedge shaped up front, with a sharp horizontal nose, it has flaring light engine wells build into the body in the front, with two forward thrusters attached to the tapering back end. It's white and looks in excellent condition for it's hundred plus year age. It produces a hazy light blue glow underneath. 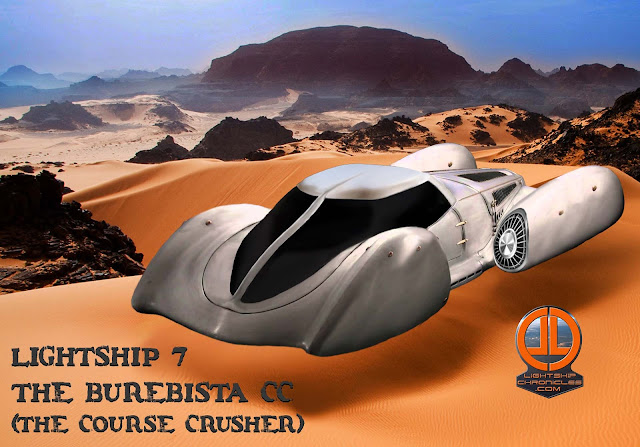 Lightship8 is the Yellow Teardrop. It's the same design as ship4, teardrop shaped, but looks clean and new, freshly painted in bright yellow. It floats over a light green pillow. 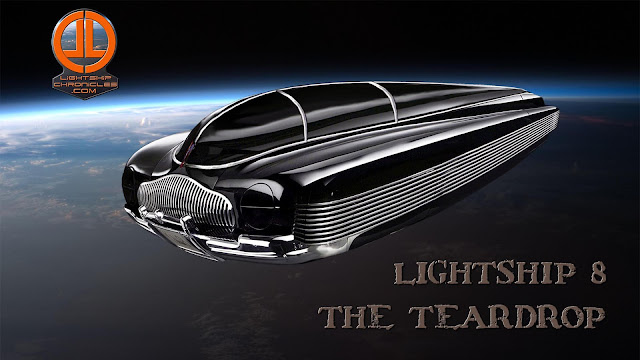 Lightship9 is the Radd Menace. It's crimson red with the underside in shiny gold. The center body is vertically taller than wide with a circular bubble attached to the front. It is very angular with hard edges and the back is segmented and tapering vertically. It's light engines are swept back, starting from the middle of the body and sweeping long behind it. They are tall and thin and slightly more rounded than the rest of the ship. It floats on a golden glow. 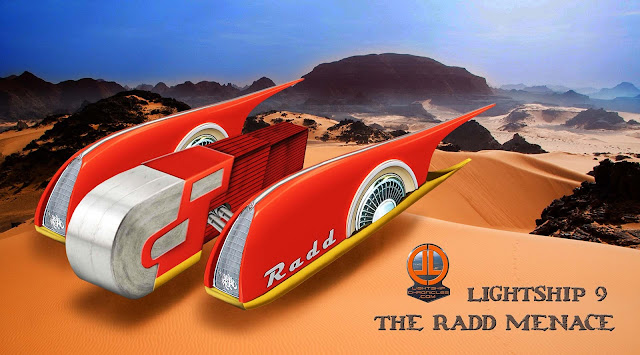 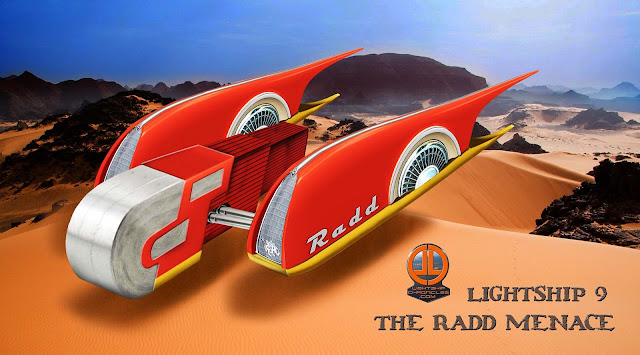 Lightship 10 is The Obsidian Blue. It's engines are one single oval glossy dark blue disk attached by four arms to the central black obsidian looking bubble. It floats on a rich purple light pillow.


Lightship 11 is The Split Almond. Like the crashed 9 it is almond shaped but split down the middle. The two light engines with the bubble in the middle, and towards the back, make it look like a broken apart almond. It's clean new and bright orange and floats on a red glow.


Lightship 12 is the Pearl Beauty, another modified civilian ship. It's a pearl white lightship and looks a bit similar to old 1930's Earth Automobiles, mainly the Auburn series, with a long sleek body that tapers down in the back. The bubble is in the center with four shapely light engines flaring out like wheel wells. It's beautifully decorated with copper grills at the front of the engines and body, and other copper details and stripes flowing with its curves. It floats on a faint greenish-blue pillow of light.

Lightship 13 is the Winged Cone. Shaped like a flattened cone it is long with a bubble at the back. On either side of the bubble it has two tubular light engines, each with flaring canards both horizontal and vertical. It also has a large vertical canard behind the bubble. It's gray with black racing stripes and accents, and floats on a blue glow.

Lightship14 is the Green Orb. It's a strange ship. The body is a creamy green orb with patches of transparent bubble, forming irregular patterns all around it. Out of the body four thin arms extend in each direction with near squares engines on each end. The front and back arms are longer while the side ones shorter. It floats on a bright green light pillow.

Lightships15 is the Junker. This one has no bubble at all. The pilot is completely exposed, with only his suit and helmet protecting him from the heat, wind, dust, and sand at speeds reaching 600 kilometers per hour. He does have a small front windscreen, and metal flares encapsulating him on the sides, for some protection. The center body of the ship is a long cylinder with the pilot startling it, leaning forward as if riding an Earth speed bike. At the front and back there are two light engines forming T shapes at both ends, each a different size. The front is wider, while the back shorter but thicker. Over the front there are metal sheets bent over like streamers to protect the front end. The ship looks like a hodgepodge of formerly crashed parts hobbled together to create this masterpiece. It floats on a bright blue glow. 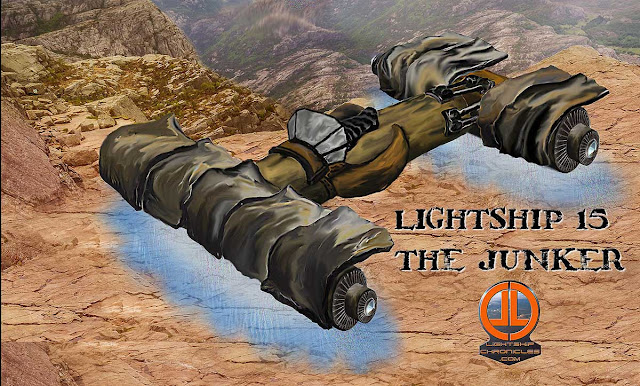 All the lightships have the one common and most important feature. The light pillow glowing below that seems to be the mechanism that keeps the ships floating up in the air. It does seem to apply force to the ground causing rocks and dust to be shot out of the back. It also seems to only allow for forward and backward movement. The ships do not slide sideways. The colors vary, but most ships have either red, green, or blue light pillows glowing beneath them, but with significant variations in their hues, from purple and sky blue, to green sea, sulfur yellow, and orange sunset variations. 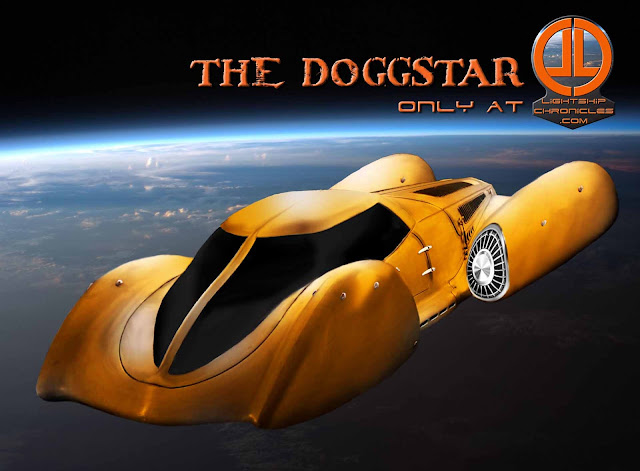 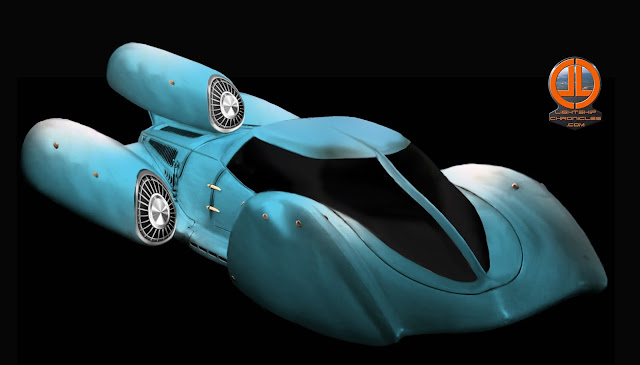 Posted by AnOldBlackMarble at 6:14 PM