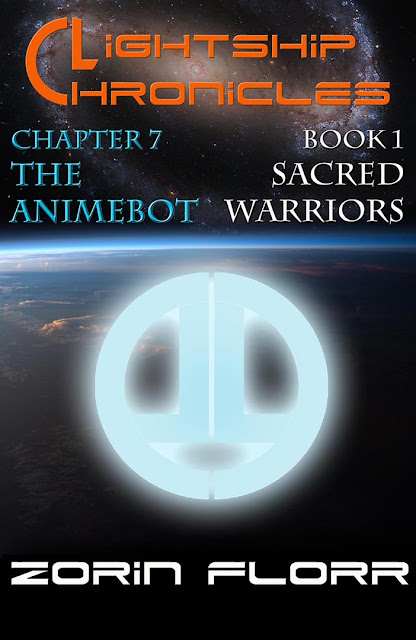 Mykee is on the sofa-bench on the east wall of their living room fiddling with his panel. Andee approaches than sits at the table with a late night snack.
"What'ya watching?" He asks his little brother.
"Highlights of the race. That Gavor, he's a real good pilot. Too bad he killed the Ghost. He was a good pilot too."
Mykee looks up to Andee who's eating quietly.
"Are you still mad?"
"I'm not mad."
"Yeah you are. You're mad cuz of that girl, and because what happened to the Ghost."
"Whatever. Watch your highlights."
Mykee makes a disapproving face and then looks back at his display, but a second later he looks back up at Andee.
"You're being dumb. You loved the prave last time. I know you want to go. If I could, I would go. Just to see those lightships out front." Andee continues chewing on his food ignoring his brother. "Lets go." And Mykee jumps off the sofa.
"Go where?"
"I want to go to the prave. I want to see the lightships."
"They don't let kids in."
"I don't want to go in. I just want to see the ships outside. Lets go."
"Mykee, it's the middle of the night. We're not going anywhere. You'll see those ships soon. I never had a vidrom when I was your age. Be patient."
Mykee contorts his face frustrated. "Than how come you're not going? All your friends are there. Why do you want to stay here?"
"It's none of your business."
"You're dumb. You won't take me to see the ships, and you're not even going yourself, for some dumb reason. Because of some girl."
"If you're going to annoy me, then go to sleep."
"Fine. You're an idiot. I don't want to talk to you any more." And Mykee rushes into the right side bedroom. Andee stares at his plate, chewing the last of his food, in bitter disappointment.

Andee and Nayaa are leaning on the mezzanine banister. The space around the stairs is getting ever more crowded. Everyone is waiting in line to get up and meet their favorite pilots and get their autographs. The dance floor is again half empty.
"Lets go dance." Nayaa nods to Andee eager to move again.
"You go ahead. I just want to watch the crowd for a while."
"Come on, I've been dancing by myself all night."
Andee gives her a long look. "I will, just give me some time to myself. It's been a crazy day."
"Fine." Nayaa a bit disappointed takes off, but rather than climb down the crowed steps she leaps over the banister, grabs onto the side rails of the stairs, then scampers down the outside of them. The crowd roars with cheers. Andee watches her with an amused smirk, and in the crowed notices Gono, Dirin, and their buddies waiting in the line. Andee heads for the bouncers controlling the velvet rope at the top of the steps.
"Is it OK if I bring my friends up here?"
The bouncer looks at him suspiciously for a moment.
"Sure that will be fine."
Like Nayaa, Andee leaps over the banister onto the side of the staircase, and climbs down on the outside of it. The crowd on the steps cheer directing all the attention to him. Gono sees him and waves catching Andee's eye. He stops, still above the crowd, and waves at Gono to come over. He does, with Dirin and his other two buddies behind him. After a struggle through the crowd on the steps, they get to the top and Andee gets them past security onto the mezzanine.
"Wow, I didn't know you were here." Gono looks at him surprised. "And VIP? How did you pull this off?"
"Hey, I'm famous. Did you forget?"
"Ha."
"You want to meet the pilots?"
"Are you kidding! Hell yeah."
"Which one?"
"All of them."
"They want you to pick one."
"Ok, I'm curious to see the pilot of the Red Menace. This was the first time I saw him, and he did good."
"Is Gavor here? I would love to get his autograph." Dirin jumps in.
"Of course you would."
"Whatever man. I promised Nayaa I'd respect you, but I don't have to be impressed by you." Dirin snarls at Andee.
"Please, don't be, but yeah he's here. I'll take you to him. By the way, he loves Nayaa. You can score some points if you tell him she's your friend."
"She is, and I will."
"Really? That dude's into Nayaa too? Man, I have no hope." Gono mumbles disgruntled. Andee nudges him, and shakes his head at Gono with a mischievous squint.
"What?"
"You'll see."

Posted by AnOldBlackMarble at 10:01 PM