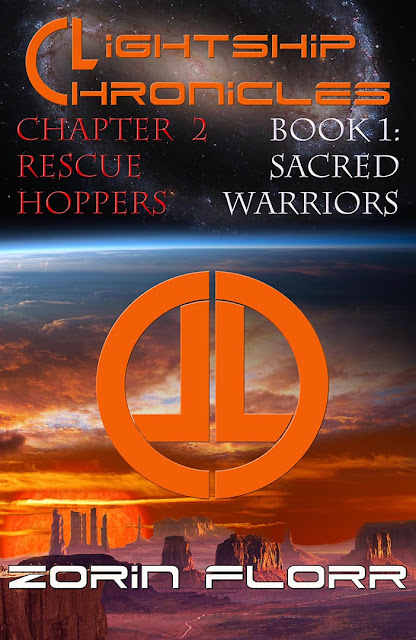 Ricio is attached to a futuristic looking respirator in a beautiful white spotless hospital room. Its walls are lined with large rectangular, near translucent glossy tiles. One wall has huge vertical windows, from ceiling to ground, with long drapes gently flowing in a breeze. There is no glass or apparent window frames just the opening overlooking a beautiful white sandy beach. The water in the nearby lagoon is crystal clear, azure blue, and the hills around the lagoon are covered in green vegetation. Palms and ferns of all kinds, swaying in the gentle warm breeze.
The automatic doors silently slide open on the opposite wall. A female doctor walks in along with the bearded man from the vidrom pictures just before the race.
"Why is it so hot in here?" The bearded man asks.
"It's the standard temperature we keep for recovering patients." The doctor responds.
"Can you please change the atmosphere to something cooler. We are Bretts, we don't tolerate this kind of heat."
"Yes of course Governor." She responds and turns to the glossy white wall by the entrance. When she touches one of the large tiles it turns into a light display like a computer screen. She touches some of the digital display buttons and the exterior changes. The former tropical atmosphere and warm breeze fade into a green Alpine view with snow capped mountains in the distance. The breeze changes from warm to a gentle cool, still flowing through the open 'windows' and fluttering the drapes.
"How is he?" The Governor asks the doctor as she steps back up next to him.
"He is doing very well Governor Brett. We repaired all the damage successfully, and he should heal without any scarring or complications."
"Good. How long?"
"A couple of weeks, and he should be fine."
"Why so long?"
The doctor slightly taken aback responds with a frown. "His internal injuries were quite severe. He had a punctured lung, nine broken ribs, bruised liver, but worst of all, a severed artery. Had he been exposed out there only minutes longer he would have died. He was fortunate to be found by that boy. If not..."
"I know, I saw the footage." Governor Brett responds dismissively interrupting the doctor. "How long before he is awake and speaking?"
"Four to five days at least."
"That's too long. I need to nip this in the bud now."
"I'm sorry Governor, but we are dealing here with a literally broken heart. Until that torn artery is perfectly healed he can't move."
"I understand, I understand. I'm just concerned what he may have said to that boy. He could be dangerous."
"Politics aren't my game, but Governor, I think you're misdirecting your energy. I think you should be grateful not suspicious. Your son is here, alive, and soon to be well because of that boy."
"Doctor, you've done great work, and I appreciate that, but keep your opinions to yourself." The Governor shuts her down with the cockiness and arrogance of a well healed politician.
"He is in good hands here, but now I will leave you with you son." And the doctor, clearly displeased, briskly turns away and rushes out of the room.
The Governor stands over his son's bed staring at his unconscious and injured body lying under a series of very clean and futuristic machines.

Posted by AnOldBlackMarble at 8:01 PM